Chopta is a small region of meadows and evergreen forest area which is a part of Kedarnath wildlife sanctuary located in Uttarakhand state, India and a base for trekking to Tungnath, third temple of Panch Kedar, which lies 3.5 kilometers (2.2 mi) away. Located at a distance of 1.5 kilometers from Tungnath is Chandrashila, a rising to over 4,000 meters (13,000 ft).

It is an unspoiled natural destination lying in the lap of the Uttarakhand Himalayas and offers views of the imposing Himalayan range including Trishul, Nanda Devi and Chaukhamba. It is located at an elevation of 2,680 meters (8,790 ft) above sea level. Chopta village is surrounded by forests of pine, deodar and rhododendron and is rich in flora and fauna include rare species of birds and musk deer. If you’re lucky, you can also see “Monal”, a very colorful bird which is seen in alpine forests. Monal is also the state bird of Uttarakhand. 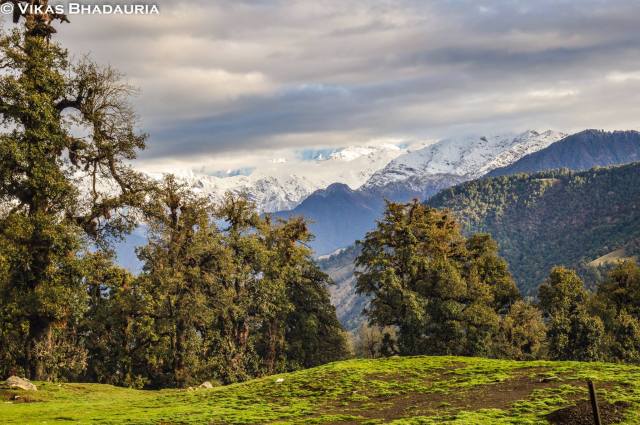 Chopta lies 29 km from Ukhimath, 209 kilometers from Rishikesh and approximately 450 kilometers from the capital Delhi. The best time to visit is from April to November. Chopta is also a popular destination during the winter months due to the snowfall that the area experiences. Tungnath temple and Chandrashila are covered with snow from December to March. Chopta can be reached from Rishikesh via Rudraprayag , Kund , Ukhimath OR via Rudraprayag , Karnprayag , Chamoli , Gopeshwar. 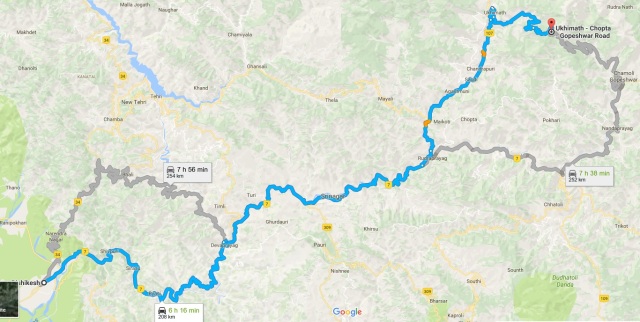 There are multiple options to reach Chopta :

Chopta is well connected by motor-able roads with major towns of Garhwal region of Uttarakhand state. Follow NH58 until you reach Rudraprayag and after reaching Rudraprayag follow the route to Kedarnath and take right turn to Ukhimath. Chopta is situated 40 kms from Ukhimath. Chopta is also accessible from Gopeshwar. Buses and taxis to Chopta are available from major towns of Uttarakhand region. From Rudraprayag or Augutsyamuni, You can either book your own taxi or take a shared taxi going towards Chopta.

Roads are well maintained till the intersection to Saari village. After that, there are some small bad patches. Overall, good roads till Chopta

Remember : Shared Taxis and buses do not ply in the late hours i.e. after 4 PM so reach Augustyamuni/Rudraprayag/Ukhimath before 4 PM or you will have to wait till next morning.

Train : The nearest railway station to Chopta is Rishikesh situated 209 kms away. Rishikesh is well connected by railway networks with major cities of India. Buses and Taxis to Chopta and Ukhimath are easily available from Rishikesh.

Flight : Jolly Grant Airport is the nearest Airport of Chopta, situated 226 kms away in Dehradun district of Uttarakhand state. The remaining journey has to be covered either in a taxi or in a bus. Taxis are easily available to Rishikesh, Rudraprayag, Ukhimath and Chopta from Jolly Grant Airport.

Best time to to travel to Chopta is in Summers (April – June) and Winters (Oct & Nov). Travelers interested in snow fall or want to experience snow trekking in Chopta then Dec to April are the best months.

You can not reach Chopta in your vehicle in winters due to lot of snow/black ice on roads. You have to leave your vehicle at-least 10-12 Kms before Chopta and trek for rest of the way in snow

Summers: The weather of Chopta remains pleasant during summers. the days are warm and the nights are moderately cold. The Himalayas are distinctly visible and the cool breeze adds charm to the vacation. Carry light woolens (a Jacket/Sweater, Muffler, Cap and Woolen Gloves) with you.

Monsoons: Chopta is most beautiful in Monsoon season There are chances of getting roads blocked for a couple of hours due to landslides but the scenic beauty of Chopta during monsoons is worth taking the risk. Do carry raincoats.

Winters: With very less or no tourist rush, winter season is best for those who are looking for solitude and want to do some adventure trekking in snow. The region is blessed with snowfall during winters and the accommodation options also remain few. But you can see the best of Chopta during winters as it looks like mini Switzerland during winters. Winters are freezing at Chopta so do carry heavy woolens.

Remember: It can rain anytime in Chopta regardless of the season or it might snow/rain (Winter/Summer respectively) on the trek to Tungnath. Always carry rain gear (Rain suit/Umbrella) with you if you don’t want to be soaked in rain and fall ill due to cold.

Things to do/ Places to visit

The temple is believed to be 5000 years old and is the third (Tritiya Kedar) in the pecking order of the Panch Kedars.

You can get ponies till Tunganath during season (May-August/September). in off season, you have to complete the trek on foot. Do bargain with pony walas.

Also, during season, there are a lot of shops open on the trek so you can get water/tea/snacks/maggi but in off season, you should pack your lunch. No shops are open in off season.

Chandrashila peak is situated at a distance of 2 Kms from Tunganath but there is no paved path and it is a steep ascent. Hence not all the people who visit Tunganath, go to Chandrashila.

If you want to witness the majestic sunrise from Chandrashila, leave from Chopta by 2-3 AM.

It is also believed that it was the place from where the mighty Pandavas were asked queries by Yaksha. According to the locals it was also said that this lake was built by Bheem who was strongest among the Pandavas to appease his thirst and Yudhister who was the wisest suggested Bheem to build his own lake.

Stay options: Since Deoria taal comes under Kedarnath wildlife sanctuary, no permanent structures are allowed at Deoria taal. Not even the toilets.

During the season, there are a lot of Dhabas running at Deoria taal which are the only source of food. water and other things. The dhaba owners also provide tents at a reasonable price for night stay at Deoria Taal but you need to bargain with them.

Since there are no toilets, people have to freshen themselves in open. The only source of water is the Taal itself but it is not drinkable.

Fees : Not many people know, but yes, there is a fee to enter and camp at Deoria Taal.

The fee structure is as below:

As you can see, Bon-fires are strictly not allowed. So, do not push your tent provider to arrange for one.

By your own vehicle (For people with less time) :

There are many stay options in Chopta and Beniyakund during the season (April-October/Nov.). However, in winters, when the snow accumulates, a lot of hotel owners close the hotels/dhabas and move to the lower regions.

It is strongly recommended to book your stay in advance if you are going between April to October. I have seen people spending night inside their cars/tempo travellers in freezing temperatures because they did not book in advance.

There are many hotels/dhaba/tents in Chopta & Beniyakund suited to all type of budgets.

Some of the hotels/dhabas/tent details are as below:

1. There is No Electricity in Beniyakund, Chopta or Tunganath. Local Shopkeepers and hotels are totally dependent on Solar power for electricity need. Bring your power banks with you if you need the mobile to find way through maps.

2. Apart from on-off reception on BSNL, no other network works in the region. You will only get signals either mid-way while trekking to Tunganath or at Deoria Taal.

3. It can rain anytime in Chopta or on trek to Tunganath, keep the Rainsuit / umbrella handy.

4. It’s better to pack your lunch while going on Tunganath trek. in off season, You might not find any place to eat and will be famished till you come back. Also, it is strongly recommended that you carry your water bottle.

5. Please DO NOT litter anywhere. Bring back the trash with you and dump it at a suitable place in the plains. Any litter dumped anywhere in mountains will eventually end up in the rivers and further pollute them.